With the newly developed silicon CMOS type smell sensor, ultra-compact, high smell resolution and low cost can be realized, to be embedded to system such as smartphone or IoT devices. For instance, it is expected that resolution equivalent to dog nose’s resolution (roughly 1,200 receptors) within 1mm die size can be achieved using the new type of sensor substrate. 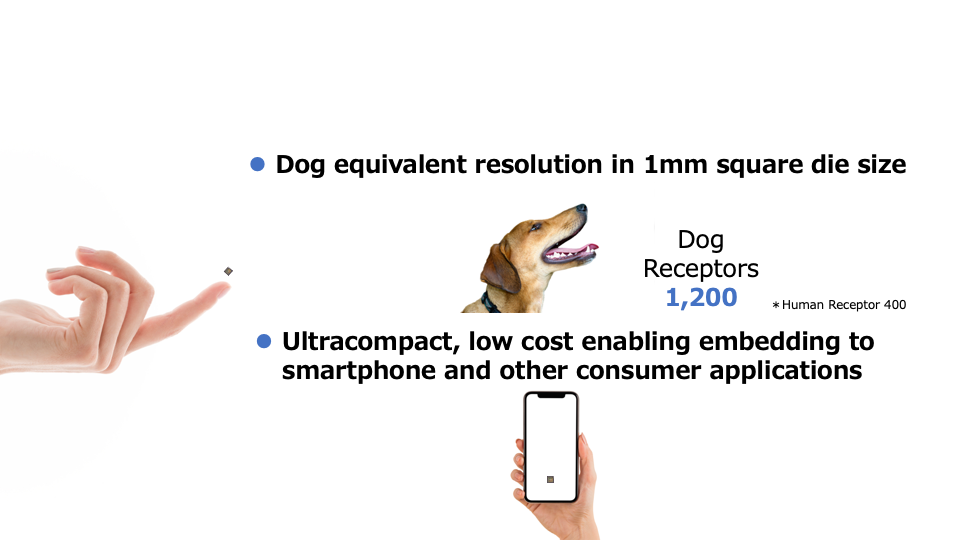 Aroma Bit is currently also accelerating its development of digital smell database or smell big-data based on its hardware competitive advantage. Sensor hardware and smell database together, Aroma Bit is committed to retain its top-position in growing digital olfactory market, thereby realizing Aroma Bit’s vision “to realize a better world by visualizing the world of smell/aroma through odor imaging technology.”

While University-Launched Venture company is on the rise in Japan, there is limited successful case leading to industrialization, due to factors such as lack of intellectual property conflict among large companies interest, skill set mismatch on researcher as entrepreneurs, among others.

In this particular Industry-academia collaboration case, the chance to commercialize technology is expected to increase by assigning venture company a role to drive business development of the technology developed jointly with university.

In the interest to aggregate the achievement from COSCo consortium and further accelerate development and industrialization, Aroma Bit Silicon Sensor Technology, Inc. (Hereafter, “ABSST”) is founded as Aroma Bit’s subsidiary.

Going forward, ABSST is committed to develop the silicon CMOS type next generation smell sensor that are ultra-high resolution, ultra-compact and low-cost embeddable to smartphone and IoT Devices.